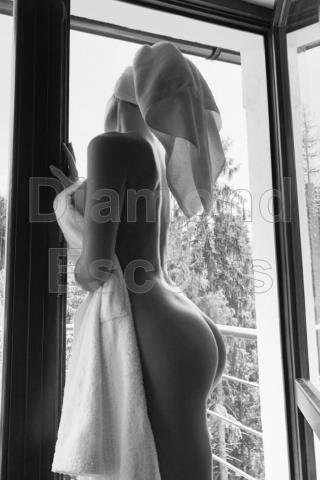 College is little about the study, and is more so all about the dirty, wild fun that girls get into, especially in freshman year. This was no different for the ever-so-popular Bailey when she was an 18-year-old freshman, and now, being 23 years of age, she looks back on her experience with a smile.

Bailey was far from the promiscuous one back in high school, but was an extremely sexual young woman as she masturbated on a regular. Despite her intense level of sexual desires, she had never really hooked up with that many boys before. At 18 years of old, she was still a virgin and although proud of her clean, tight pussy, she was eager to let someone fill her, but in the meantime, she took it upon herself to be adventurous with her solo-sessions.

One day in freshman year, Bailey got herself off in an empty public bathroom in a coffee shop. She walked into a bathroom stall and locked the door behind her. Despite the vulgar drawings and graffiti all over the stall walls, Bailey decided that it was clean enough for her to quickly finger herself.

As she unzips her pants, she can feel her pussy getting soaking wet. She pulls her pants down to her knees and rolls down her already-drenched panties, to reveal her warm, craving pussy. She began to rub her soaking wet lips, spreading her legs as she grew closer to climax. Rubbing from her clit to her hole, Bailey moaned as she grinded her hand fiercely, squeezing her breast with her other hand. Just as she peaks her orgasm, Bailey grabs her perky little nipple and pinches it hard as she shoves two fingers deep into her tight, virgin pussy, allowing her thumb to continue to stoke her swollen clit. Within seconds, Bailey lets out a roaring, pulsating explosion of pleasure. Her vagina walls clamped tightly around her fingers as her body shook and shivered from intense satisfaction, letting out a stream of sweet, juicy cum.

As she cleans herself up, Bailey begins to think about all the unimaginable endeavours she will get into throughout her freshman year. After all, this was only the first week. As she walked out of the bathroom, she realizes that she must have gotten a little loud as a group of sexy young guys stood outside the lady's room, with their jaws still dropped to the ground. With a flick of her hair, a sly smirk and a wink, Bailey walks past the group of young men, thoroughly satisfied. Just before she exits the coffee shop, Bailey stops right in front of one of the guys who managed to pick their jaws up off the ground and smirk back at her. As she looks down towards his bulging package, Bailey lightly grazed his penis with her still wet hand and travels her eyes back up to his. "Hi!" she says as she smirks and walks out, leaving him dreaming about her for days.