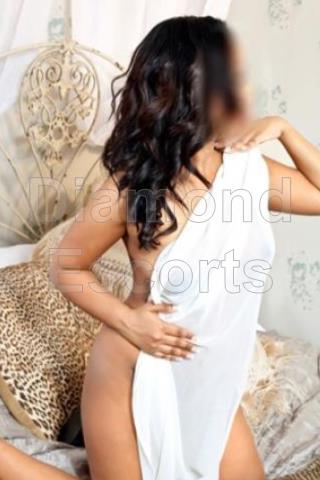 All alone one day, Roberta was growing bored with absolutely nothing to do. As per usual, all she could think about was sex. She began flipping through her phone contacts, telling a select few that she was home alone and eager for some company. One friend of hers did respond and was well on his way to Roberta's house, and although he'd be there shortly, she decided to start without him, preparing her sweet pussy for him.

As he parked in the driveway and began walking up the front steps, Roberta's loud moans attracted his attention as he passed the window. Screaming, groaning and moaning, Roberta was at the peak of her climax, ready to explode. Just as he walked in the front door, he found Roberta lying there, legs spread wide, exploding wildly.

"Damn!" he said as he felt his cock growing in his pants.

Roberta smiles up at him and with a wink, motioned for him to come closer. He stood over her legs which were spread out from the couch onto a foot stool as Roberta pulled him down, closer to her face. As they kissed hello, Roberta took a nibble on his lip, hinting at how badly she wanted him.

He then roughly grabbed Roberta's legs with both of his hands and spread them wide, opening her pussy up for him. He began to slide his hands slowly from her knees, to her inner thighs, staring deeply at Roberta as her breath shuddered with excitement.

He teasingly put one finger into Roberta's mouth as she sucked it wet. "Good girl!" he said as he slid one finger deep into her soaking wet pussy. Pulling his juice covered finger out of Roberta, he brought it back up to her mouth and demanded that she taste herself. Obeying his command, Roberta sucked his finger and tasted the sweetness of her own pussy.

Sliding his hands back down, he inserted his fingers and began to finger fuck Roberta's tight pussy as he licked her clit violently, increasing the movements as her moans grew louder and more intense.

He then dropped his trousers and grasped his cock. He then began teasing Roberta's drenched pussy. He grabbed her hips with his big hands and flipped her over to her front side, leaving her big, delicious arse open for entry. As he slapped his cock on Roberta's pussy, he slapped her arse with his hand and asked her how bad she wanted it.

Just as Roberta was responding, he quickly jammed his throbbing hard cock deep into her pussy. With one thrust, he was fully, deeply and completely inside of her. Roberta gasped from pleasure as he continued to fuck her tight pussy hard, rough and fast. He reached around and started tickling Roberta's clit. Roberta began to moan uncontrollably again as he pounded her sweet pussy and played with her clitoris.