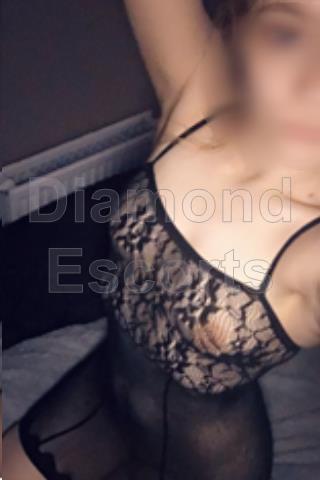 Kristina was meeting up with a client just for a mid-day quickie. Her client had an extended lunch break and he was eager to take advantage of the extra time, so he agreed to meet Kristina at her place which was conveniently close to his office. He entered through the garage as he was instructed to do, and within seconds, Kristina was dragging him inside of her home, and practically, inside of her as well. She was pulled at his trousers, practically begging for his cock as she led them down the hallway and to her bedroom. It didn't take long for her to start attacking him, stripping his clothes off in a hurry. Sure, they arranged a quickie, but Kristina truly couldn't wait to feel his cock inside of her. She was hot, horny and eager to devour this man's lunch break and give him something good to taste.

As soon as Kristina stripped her client of all his clothes, she threw him onto her bed and stripped herself with a pure sense of urgency. As she slid her knickers down, you could see the moisture of her pussy reflecting in the light. She was dripping wet and needed to feed her client. She straddled on top of his chest and shoved her wet pussy in his face.

Still somewhat surprised, her client muttered something that wasn't coherent as Kristina straddled on top of his face with her knees planted on either side of his head. She lowered her moist lips onto his face as he began to lap at her swollen, wet clit.

"Shove your tongue in my pussy. Eat me like I'm the most delicious meal you've ever had. Fucking eat my fucking cunt!" Kristina shouted, grabbing his head with her hands, pulling his face closer into her pussy.

Her client looked up to watch Kristina's eye roll back into her ate in complete oasis. He ate her fiercely, deliciously and didn't stop until he could feel her pussy lips clamp on his tongue that was deeply plunged inside of her. She let out a loud roar as she shot her juice all over his face and inside of her mouth. Her client gripped her hips as he grinded his face deeper into her pussy, making sure to get every last drop of his lunch. He wrapped his lips around her clit, sucking it into her mouth and flicking it with his tongue as Kristina shuddered and moaned with delight.

"Full?" She said as she winked at her client.