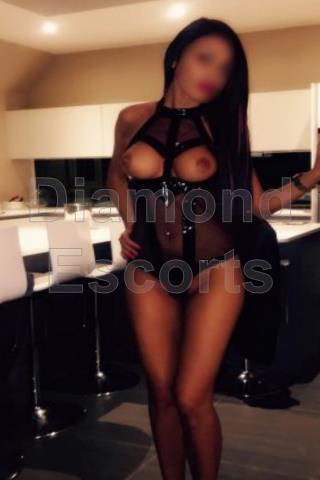 I took a glass of orange juice that was offered to me by the best man. He was the most handsome of the lot and I smiled as he was the one that made the arrangements. He takes my hand and led me to the groom. I drink the last of my juice and I hand the best man my glass. I sit on his lap, wrap my hands around his neck and begin to nipple his ear.

“Looks like we got a live one here boys!!!” He exclaimed loudly as he squeezed my ass. Not all escorts can take gang bangs but I love being filled by real live male specimen. The more the merrier I always say.

“Why don’t you do a little dance for us babe, before we fuck you?”

I smile and stand and he slaps my ass. I see the best man disappear behind the curtain and then music begins to play. He comes back and says, “Well she can’t dance without music can she.” He winks at me and I suspect that he has a crush on me.

I move my body to the music seductively, moving from one guy to the next but ensuring that most of my attention goes to the groom. I slowly untie the knot of my top behind my neck and I allow it to fall away exposing my high, firm breasts. I smile as the guys hoot and holler their pleasure. I straddle the groom and rub my breasts in his face. He nibbles my nipples a bit before releasing me to the other guys.

One guy removed my top completely while another helped me out of my skirt. I walk towards the best man and place my stiletto clad foot between his legs. I rub my foot gently one his cock and smile as I see his cock coming to life.

Someone grabs me from behind and squeezes my breasts while another part my legs and his licking my pussy as though it’s the last supper. I smile at the best man before allowing the guys to carry me to a reclined chair. I leaned back as one adjusted my legs and ate my pussy, another sucked on my breasts and my mouth was filled with another’s cock. I watched as the guys began playing with their cock getting it ready to be eaten or to push it in my ass or cunt, everyone except the best man.

While the guys were at the casinos in Vegas I stayed in my hotel room and slept. I was asked to meet them again in one of the hotel rooms around 1am. I ensured that my alarm was set so I wouldn’t over sleep. Gang bangs take the most out of you because you have to please so many people and so many people are eager to please you back. I got up around 11:30pm and began to get ready. I took a nice long bath, washed my hair and even had time to repaint my toes.

I knocked on the door and I was quite surprised to see none other than the best man at the door. He moved aside allowing me to enter the room. The lights were dimmed and there was a small table in the middle of the room decorated with candles. He offered me his hand and he led me to the table. Like a true gentleman he pulled my chair out for me. I watched as he made his way to his chair and sat.

“Where are the other guys? I wasn’t expecting to see just you?” I sipped my drink.

“Are you disappointed?” He smiled and I watched as the light from the candles danced across his face.

“Actually no. I’m pleasantly surprised.” I watched as he uncovered the two dishes before us. The aroma filled the room.

“I thought that you may be hungry after your long afternoon.”

I hadn’t eaten anything since breakfast and with the delicious aroma my stomach was now begging for something to eat. We ate and chatted like old friends. When we had finished he opened the doors to the balcony. The cool breeze brushed against my face and I welcomed it. On the balcony there was a blanket and two pillows.

I smile coyly. I turn to him and say, Dinner was superb. I wonder what we’re having for dessert.”

He pulls me close to him, wrapping his arms around my waist and whispered, “I thought you would never ask.”

This sounds like the experience of a lifetime, always wanted to be part of the mile high club, its my mates stag in just over a year, I will definitely be on the lookout for some high class ladies to make this fantasy become a reality. If this blog is anything to go by, im sure we'll be in for one hell of a flight! :-)