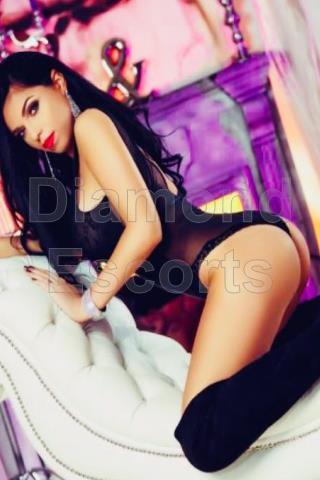 It was a very long week for escort, Sarah and she was excited to have one of her favourite regulars coming to visit her on this particular night. She eagerly jumped in the shower and polished every single nook and cranny of her luscious body. She threw on her favourite CD and cranked the volume up as high as it would go as she moved her hips to the sounds of the beat. She reached into her sex box that was full of all kinds of toys, outfits and objects that she loved to implement into her sexual pleasure's this night, and she chose a leather and latex outfit that she had yet to use. As she opened the brand new bag, the smell of the leather made her bare pussy drip her juices down her legs. She grabbed some handcuffs out of the box, and a whip and tossed them on the floor with the intent of using them later.

Sarah completed her latex and leather appearance with wild, teased hair and dark lipstick. She successfully transformed her elegant self into a sexy badass that was ready to give the lucky man a night that he would never forget. She zipped up her thigh high black leather boots and sat on her chair with her whip and handcuffs in hand as she waited for her client to walk into her house.

Reaching into her box of dress-ups, she chose a leather and latex number. Opening up a bag which she rarely used, she grabbed a whip and handcuffs.

To her delight, his reaction was exactly what she wanted. He was stunned and couldn't believe the sight that was in front of him. It took him a while to even notice that the woman sitting in front of him was Sarah, his escort girl. She looked so different and he liked it, and the sexual look in her eyes could never be mistaken as being someone else.

"Sit down", Sarah demanded as she walked over towards her client. He obeyed his master's commands as she began to secure his hands behind him with the handcuffs. He was powerless and she was about to take advantage of him. Sarah began to remove his trousers. Her breasts that were bulging from her leather outfit were right in his face, but with no hands, the man could do nothing but look. His arousal was prominent and it made Sarah crack a little smirk. She was about to devour him.

Sarah continued to blindfold her client, forcing him to use nothing but the other senses available to him. The room got very quiet as she shut off the music and her victim sat there wondering what was about to happen next. His breath told Sarah that he nervous but excited... And this made her anxious to get started.

Without warning, Sarah took his manhood completely in his mouth. She sucked so hard that it took his breath away. She engulfed the full length of his cock over and over again, and just as she felt her client about to lose the little control that he had left, she stopped.

He sat there in silence, wondering what was about to happen. He heard Sarah's footsteps trail in and out of the kitchen and felt something cold and sweet smelling drip over his chest and cock. The trail was followed with Sarah's tongue as she licked up every last drop of the sweet tasting sauce, paying close attention to his nipples and balls. Again, everything stopped.

Before he knew it, Sarah was demanded him to "Eat this." To his delight, it was her bight, luscious tit being forced into his mouth. He devoured it like the good boy that he was, and once again, just as he was about to lose himself, Sarah withdrew. There was nothing more that he wanted other than to have full freedom and devour her the way he wanted to. He began to fiddle with the handcuffs that had left him without any control, and Sarah took notice. She whipped him across his legs for being the bad boy that he was and reminded him that he was her slave. Scared, yet excited, he sat there awaiting what was going to come next.

He felt Sarah's knees on his knees, and the warmth and wetness coming from her pussy certainly couldn't be mistaken. He felt Sarah lower her soaking wet pussy down on his long, hard shaft.

Just when she was about to lose all control, she untied her client and led him to the couch. She bent over and reached behind her to grab his cock and shoved it hard into her ass. Instantly, the two began to scream in completely ecstasy as they came harder than anything that they have every experienced before.
Tags:
Escort, Fuck, Handcuffs, Sex, Sexy Escort, Whipping Escort